The “Best of 2007” lists are cropping up everywhere.  It’s that time of the year.  Being a list person, myself, I can’t help but make my own.  Here we go.  I’m going to limit my list to the books that I’ve read and then written about on “Down and Out” in 2007 (see the “Down and Out” BOOKLIST for a full list of those), but I’m not going to limit my list to books published in 2007.  Now, with this list’s philosophical underpinnings out there, I’ll get on with it.  There are four books I’d like to list. The best book I read in 2007 was Annie Dillard’s Pilgrim at Tinker Creek (1974).  The next three would have to be Edward Abbey’s Desert Solitaire (1968), Paulo Coelho’s The Alchemist (1993), and Elizabeth Gilbert’s The Last American Man (2002).  Dillard and Abbey write about nature in a way that transports readers into the place.  Whether that place is on the banks of a creek or in the middle of the Utah desert, these writers take us there.  Their language is smooth, simple, and sensual.  I fell in love with Coelho’s The Alchemist when I read it a few weeks ago—this story is simple (and short), but it contains these kernels of wisdom and truth.  I have talked about this book with many people since reading it, and I realize that The Alchemist has the ability to touch a wide variety of people and to speak to them wherever they may find themselves on their life-journeys.  I believe that this book will come to be regarded as a literary classic.  Finally, Elizabeth Gilbert’s The Last American Man, which tells the story of Eustace Conway, is the best biography that I read this year (and I love biography).  She mixes history and adventure into her story in a way that keeps the narrative from getting bogged down in detail (as biographies often seem to do).   Gilbert’s more recent Eat, Pray, Love (2006) has continued to garner praise, but I think that The Last American Man is a better—and more important—book.  I would LOVE to know what you folks out there think.  Please leave a comment and let us know about the best books YOU read in 2007. 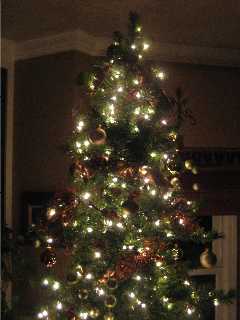 Merry Christmas and much love from “Down and Out.”  Let’s be honest.  The holidays aren’t ALL jolly (sorry to be a Scrooge), and whenever I think of poetry at this time of the year, I think of Lord Alfred Tennyson’s “In Memoriam, A.H.H.” (1850).  Tennyson’s poem mourns the loss of a dear friend, and I like how he uses the holidays as a marker for the passage of time.  To read the entire (long—but gorgeous) poem on The Literature Network, click here.  I’ll leave you with just one Tennyson “In Memoriam” quote, from section 104:

To-night ungather’d let us leave / This laurel, let this holly stand: / We live within the stranger’s land, / And strangely falls our Christmas-eve. / Our father’s dust is left alone / And silent under other snows: / There in due time the woodbine blows, / The violet comes, but we are gone.

“This crooked chronicle.  These melancholy memoirs.  These banal confessions of a literary bum.  Why write, why write at all?  What is the point of this tedious scratching, this laborious typing, this endless monologue written on the wind?” –Edward Abbey, in the Introduction to Abbey’s Road (1979)

Abbey’s Road, a collection of nonfiction essays by Edward Abbey, covers quite a bit of ground—from Australia’s interior to Mexico’s coast to the American desert.  The book is divided into three sections:  Travel, Polemics and Sermons, and Personal History, infused—in typical Abbey fashion—with curmudgeonly comments, out-there adventure, and at least one bad night in a bar.  Of the essays, I found “Back of Beyond” to be the most rip-roaring.  This essay reads like an out-of-control car careening down a highway at night.  It gains momentum and gets ugly and ends in (figurative and literal) demolition.  In this essay, Abbey tells of his journey into “the red heart of Australia” and his attempt to drive a “fat Ford Falcon four-door sedan (made in Adelaide)” to Ayers Rock.  Despite a flopping flat tire, Abbey drives on.  When the “OIL” and “TEMP” lights start glowing, Abbey drives on.  Only when the vehicle smokes and sputters to a standstill does he finally give it up.  Perhaps even better than the book’s essays is its introduction, aptly titled “Introduction: Confessions of a Literary Hobo.”  Here, we catch Abbey in a few moments of heart-to-heart.  In answer to his own question: “Why write, why write at all?”  Abbey offers this reason, among a few others that are just as compelling:  “Through the art of language…we communicate to others what would be intolerable to bear alone.”

The day after I arrived in Chamoinx, it started snowing, and then it didn’t stop for the next week.  Rocky trails morphed into groomed slopes.  When the clouds finally parted, the peaks emerged, looking rather slammed with snow and ice.  The Dru was even more sublimely beautiful with its new snow-streaked face.  Once the sun came out, the whole valley knew that it was time for some serious play.  Skis, snowshoes, and snowboards got dusted off, and we headed into the hills.  The trees, thick with snow, looked as if they had been dipped in icing and places back on the hills: 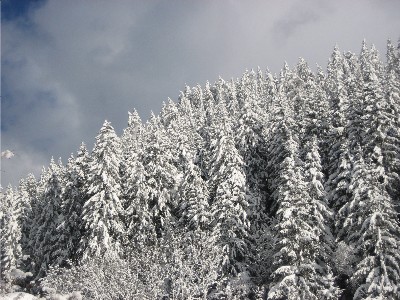 And the forests were packed with thigh-high drifts.  What had been a casual hike up the Berard Valley in the summer turned into a two and a half hour trail-breaking slog with snowshoes:

The same time on skis skinning up from Vallorcine offered a much better view:

And skiing down beats snowshoeing.  Within two weeks, winter had arrived.  Mountain biking, rock climbing on valley crags, running around the Source D’Arveyron:  these things will have to wait for warmer weather. 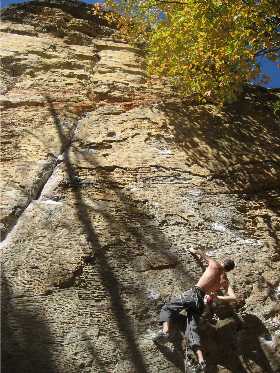 In October, I was sitting in a café in Moab, Utah, when this ratty van with California plates pulled up. Hand-painted on the back were the words “Birthday Adventure.” Two super-fit guys and a dog hopped out. Curious. As it turned out, these guys were in Moab to race in the 24 Hours of Moab (that’s 24-hours of bike racing, non-stop). They came into the shop for coffee, and when I asked them what a “birthday adventure” was, they explained. Enthusiastically. One of them told me that for his 30th birthday, he was going to ride 30 miles on each of his six bikes. The basic idea of a birthday adventure is that you have some sort of a goal related to your age, and you’re supposed to achieve it on your birthday, he told me. Okay. I pondered the idea for a few weeks, and then on October 28, I decided that I wanted to get motivated to climb more and that I wanted to climb at least 32 days before I turned 32, on December 9. This meant that I would have to climb between four and five days a week for the seven weeks before my birthday. I’m writing this post to say that I FAILED. But not miserably. I only climbed 24 out of the 32 days that I was hoping to get in. A few highlights? Day #4: Red River Gorge, Kentucky (photo above). Day #8: Brilliant afternoon on Boulder, Colorado’s third flatiron:

Day #10: Boulder Canyon. Day #18: Thanksgiving Day at Indian Creek, Utah. Of course, not all of the days were so great. I had some cold and windy bouldering sessions on Mt. Sanitas in Boulder, and I had my first few visits to the circus-like Boulder Rock Club (which costs $17 a visit, if you don’t have a pass). To round things out, I spent day #24 here climbing ice in Chamonix at the Cremerie:

That day, the skies were already gray, and even though my birthday was still a week away, I didn’t get in any more climbing days outside. The snow started falling that evening, and it hasn’t stopped since. If we hadn’t shoveled out a path, we’d be post-holing through thigh-deep powder just to get out to the road. That’s the news from here. Keep up the adventures, folks.

After recently reading Laurence Bergreen’s Marco Polo: From Venice to Xanadu (2007), I decided to revisit Samuel Taylor Coleridge’s poem, “Kubla Kahn.” Bergreen begins each chapter with a quote from Coleridge’s “Kubla Kahn,” which is actually a fragment and sometimes given this title:  “Kubla Kahn, or a Vision in a Dream. A Fragment.”  The poem begins:  “In Xanadu did Kubla Kahn / A stately pleasure-dome decree: / Where Alph, the sacred river, ran / Through caverns measureless to man / Down to a sunless sea.”  My favorite part of the poem occurs when the narrator encounters and Abyssinian maid and is enthralled with her music.  He says that others who see him cry: “Beware! Beware! / His flashing eyes, his floating hair!”  The poem’s final lines follow:  “For he on honey-dew hath fed / And drunk the milk of Paradise.”  The famously opium-addicted Coleridge claims he wrote the poem in the fall of 1797, and somewhere in this middle of his drug-induced writing frenzy, a person from Porlock (a nearby town) supposedly knocked at his door and interrupted the vision.  Therefore, the poem remains a fragment.  A reference to a “person from Porlock” has its roots in this famous literary moment, and I’d say that it still works today as a reference to a distraction or unwanted guest.  Last week, I had several procrastination attacks, and I wish that I had a “person from Porlock” to blame.  Instead, it’s just the snow falling here in the Alps that has me walking around in some sort of a living dream.  To read Samuel Taylor Coleridge’s “Kubla Kahn” on Bartleby.com, click here.  To read my more formal-type review of Bergreen’s Marco Polo: From Venice to Xanadu on About.com, click here. 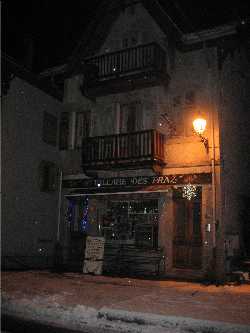 Sometimes you miss it—life—when you’re moving too fast.  At least this is what I’ve been thinking about the past few nights as I’ve been walking home through a dark and snowy forest here in the French Alps.  After the Utah trip, I had a whirlwind few days in Boulder unpacking and repacking.  And then I landed here in Chamonix, France, where minutes seem like hours, months like days.  The streets have been too snowy for my bike, so I walk.  After working in town until dark, I walk through a deserted centre ville decorated with Christmas lights.

It’s quiet.  Early season.  And the town seems to hold its breath.  The crowds will rush here this weekend when they get word that knee-deep powder now covers the slopes.  I walk.  Deserted side streets.  The chapel, glowing orange.  Unlit restaurants and hotels and bars. 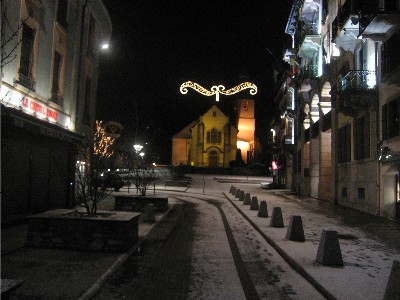 I turn off of the main road and follow a path all the way back to Les Tines, where I’m staying with a friend.  The glow of my headlamp hits the snow, and I hear the murmuring of a glacial stream.  Smell the sapins.  I walk.  It gets darker as I go deeper into the forest, and I hear a rustling sound to my left, turn my headlamp and see four pairs of frozen eyes.  They glow back at me, blue-green.  Deer.  I am afraid because I heard that someone up valley ran into a wild boar.  Killed it with a car.  Wild boar in these woods, too.

It’s almost an hour later when I arrive at my friend’s house.  I feel as though I have walked through worlds.  A fire crackles.  The hearth is warm.  I shake the snow off of my shoulders and leave my boots at the door.