“To walk the countryside in Cuba, I was sure, would be to share the paths and highways with average citizens of all ages walking to work, to their fields, or between their villages. I would learn the realities of the country firsthand.”
–Richard Fleming, in Walking to Guantánamo

A good travel book always gets me in the mood for my own wanderings. Leading up to my recent vacation (and on the plane), I was reading Richard Fleming’s Walking to Guantánamo, a nonfiction book about the author’s quest to cross Cuba the long way, on foot. Fleming takes the simple approach to his journey: “Other than to make my way to the western city of Pinar del Río, put on my backpack, and walk the thousand or so miles it would take to reach Guantánamo Bay, I really didn’t have much of a plan.” Maybe it’s Fleming’s lack of planning that allows so many wonderful experiences to permeate his journey. He explores the richness of a culture that dabbles in Santería and Voudou; he birdwatches at the Bay of Pigs; he witnesses a spoken-word poetry competition, he and dances along with the stream of music that seems to flow from every Cuban household. Fleming cheats early and cheats often on his plan to walk across Cuba—but his hilarious forays onto tractors, donkey carts, trains, and finally a bike are what make him an honest and endearing guide.

I met Fleming at McMurdo Station, Antarctica a few summers ago while he was working as a sound recordist for an artists and writers’ group. He let me read one of his early chapters while I was working the night shift on a communications gig. I knew then that this book would prove to be the adventurous and colorful account that it turned out to be. Beyond being entertaining and funny and keen to explore Cuban culture, Fleming refuses to ignore the dark undercurrent that flows through a nation riddled with political pain. In doing so, he reveals a complex and realistic picture of this place.

Walkers, adventurers, lovers of music and culture: this book is for you.

Crevasses, seracs, cliffs, avalanches, and scary steeps: these are just a few of the things that have scared me about skiing in Chamonix, France. I’ve lived in Cham for three summers—long enough to know from rock and alpine climbing that the terrain is steep, unstable, and blindingly beautiful. But I’ve never spent much time there in the winter…until my recent ski vacation. The Chamonix valley sits in the shadow of the Mont Blanc massif (the Big Mama, at right), with a nearly 13,000-foot differential between them (Chamonix is at an altitude of a little more than 3,000 ft; Mont Blanc, just less than 16,000 ft).

Coming from Vail, Colorado, I admit that I’m spoiled by the big Rocky Mountain blue skies. In Vail, it seems as if it snows only at night, and then we ski powder in the sun. Of course, this isn’t true, but I was disappointed when we skied in thick fog for four days straight:

The disconcerting thing about skiing in these conditions is that the off-piste runs from the Grand Montets-area lifts are littered with rocks, cliffs, and otherwise very variable conditions. And this is a bad thing when you can’t see beyond the tips of your skis. The French laissez-faire way of life lets anyone go anywhere, whenever, which is liberating…but a bit like stepping off the deep end at times (as Will is doing here): 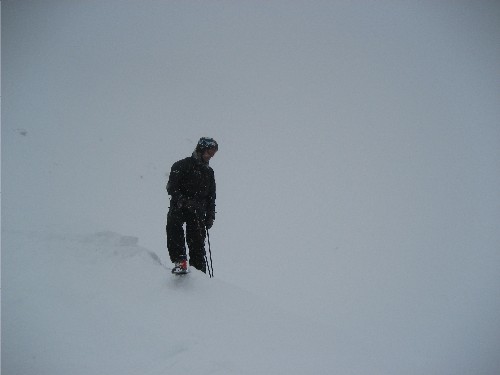 When the clouds finally parted, I remembered what it is I love about this part of the Alps. The needle peaks rip their way into the skyline, and at this time of the year, they look like they’re sugar-coated. The Aiguille du Chardonnet has always been one of my favorites, seen here from a chairlift going towards the Lognan mid-station:

Then once the sun’s out, you can see the beauty all around. The Aiguilles Rouges are impressive peaks opposite the Mont Blanc massif, with the Chamonix valley running between them. Here’s Dermot at the top of the Bouchard lift with the Aiguilles Rouges in the background:

And days like these skiing above the clouds (almost) make you forget the days spent disoriented and swimming on skis in the fog.

I take vacation seriously. As in, I use it as a reason to recklessly abandon some of life’s more practical pursuits such as work, routine, healthy eating, telephone calls, correspondence. I mean—isn’t that what vacation is for? If I’ve offended anyone in the past two weeks with this approach, I apologize. A little. So I’ll make up for my lack of chatter by dedicating the next few posts to my recent vacation’s highlights as they relate to this blog’s themes: adventure, literature, landscape, and life well-lived.

But of course, I had to stop off and visit my sister in NYC for a little city time along the way. In the process, we explored her new neighborhood of Jackson Heights in Queens, complete with an old art deco Bollywood theater, curry houses and kebab shops on every corner, and a fantastic Indian market.

We also ventured into the city as usual for a museum afternoon, this time at the very cool Museum of Arts and Design (above right), which houses some wonderfully quirky exhibits, including one that displays works made entirely of “found” or ordinary objects. Another exhibit titled “Totally Rad” showcases designer Karim Rashid’s sexy modern radiators. Radiators, sexy? Yes. The afternoon wouldn’t have been complete without a journey into SoHo and a cupcake break at Sweet Sugar Sunshine. 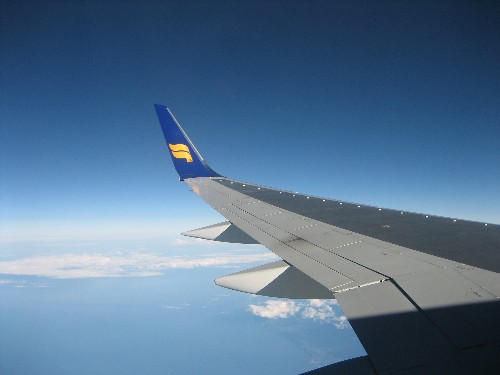 Before I knew it, the weekend had blown by, and I was on another plane. This time, I made it through a nighttime pond hop and a convenient time warp to land in Geneva early the next morning.

After a short shuttle ride to Chamonix and a four hour power nap, we were out on the slopes just in time to get a few runs in before the après-ski festivities began…