It’s warmed up here at McMurdo Station, Antarctica, so warm that the sea ice runway recently closed for airplane traffic for the season. So the view from town center out to Hut Point Peninsula isn’t littered with the sight of mobile runway structures, fueling pits, and machines. It’s a beautiful wide-open space, looking like this—if a camera can do it justice:

Hut Point is so named because Robert F. Scott and his team built a hut here on their 1901 Discovery Expedition to Antarctica. Scott is perhaps best known for his legendary and fateful attempt to be the first man to reach the South Pole. After wintering in the hut at Hut Point on Ross Island, Scott and his men set out for the pole (the hut is in a shadow in the lower right of the above photo). Scott’s team did reach the South Pole, but Norwegian Amundsen’s team beat him by a month—and then all of Scott’s team tragically died on their return journey. 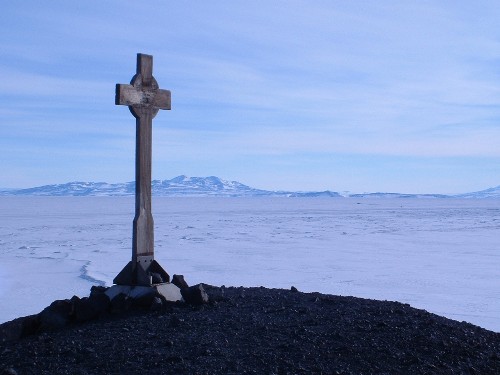 The cross that now sits on the top of Hut Point doesn’t commemorate Scott—but one of his expedition members, George T. Vince, who was the first known man to lose his life in McMurdo Sound. While wearing fur-soled boots, Vince slipped in a storm and fell over some cliffs into the icy waters below.

Antarctica can still be a dangerous place, but I more often think of the beauty here than of the killer storms and killer whales. It’s regularly between 25° F and 40° F these days, so even though incoming planes can’t land on the thin sea ice, they’re still able to land further in on the ice shelf, which is also a fantastic place to ski all day—or night—in the summer sun. 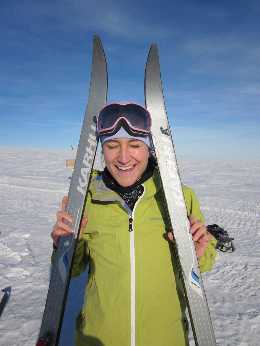 Now that the weather has stabilized, and the sun’s in the sky all day and night long, it’s my favorite time of the year: ski season. I brought a pair of skate skis with me this season to McMurdo Station, Antarctica, where I’m working for the austral summer. But in an effort to branch out and learn some different styles of skiing, I’m borrowing an old pair of Karhu Nordic skis with a three-pin binding system and a pair of soft leather boots, circa 1985. The skis have fish scales in the middle on the underside and some metal edges of unknown utility. They have little camber. They’re not superlight, nor are they superfast. These skis are sort of made for slogging along at a slow-steady pace. They’re dangerous on the downhills. 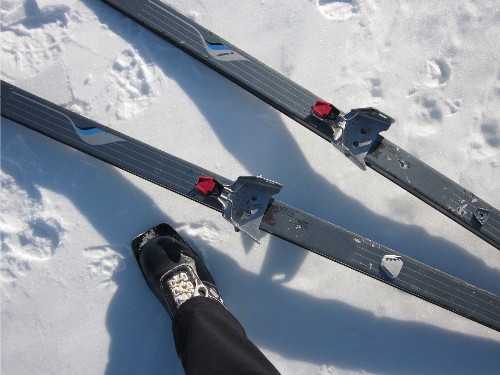 Despite the limitations of this set-up, I’ve been able to get out and about on Ross Island with my fellow Antarctic ski buddies, and others who prefer to throw a Frisbee around instead. Notice the red flags attached to bamboo poles in the photo below—these are the Castle Rock Loop’s trail markers, with Castle Rock itself looming in the background.

The Castle Rock Loop is (almost) perfect for the Kahrus—it’s got a gradual ascent at the beginning, and when the trail isn’t very smooth, these skis can just cut through the crud. Before reaching the loop’s highest point, we normally stop for a snack in the “apple,” a nice little warming hut along the trail.

Then it’s back outside for more plodding along until the screaming descent down to the sea ice, followed by a flat section that leads to Scott Base, the New Zealand Antarctic Station. 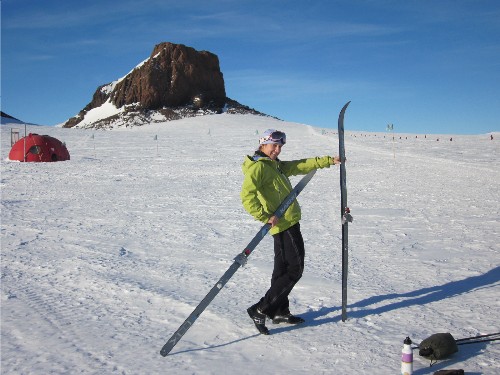 Deany (below) has been the most keen of my ski partners so far this season. Every Thursday evening, he skis from McMurdo to Scott Base. Thursday night is the only night when Americans are officially invited to hang out in the Scott Base bar with its lovely Kiwi people.

Scott Base is a 3.5 mile ski from McMurdo along a trail marked on the sea ice. Since it’s warming up outside, portions of this trail will melt out in the next few weeks, and this route will close. But more ski routes will open up on the permanent ice shelf along the roads to the late-summer airfields. The Karhus have been fun…but skate skis will be better for that; they make skiing feel like flying, fast and strong.